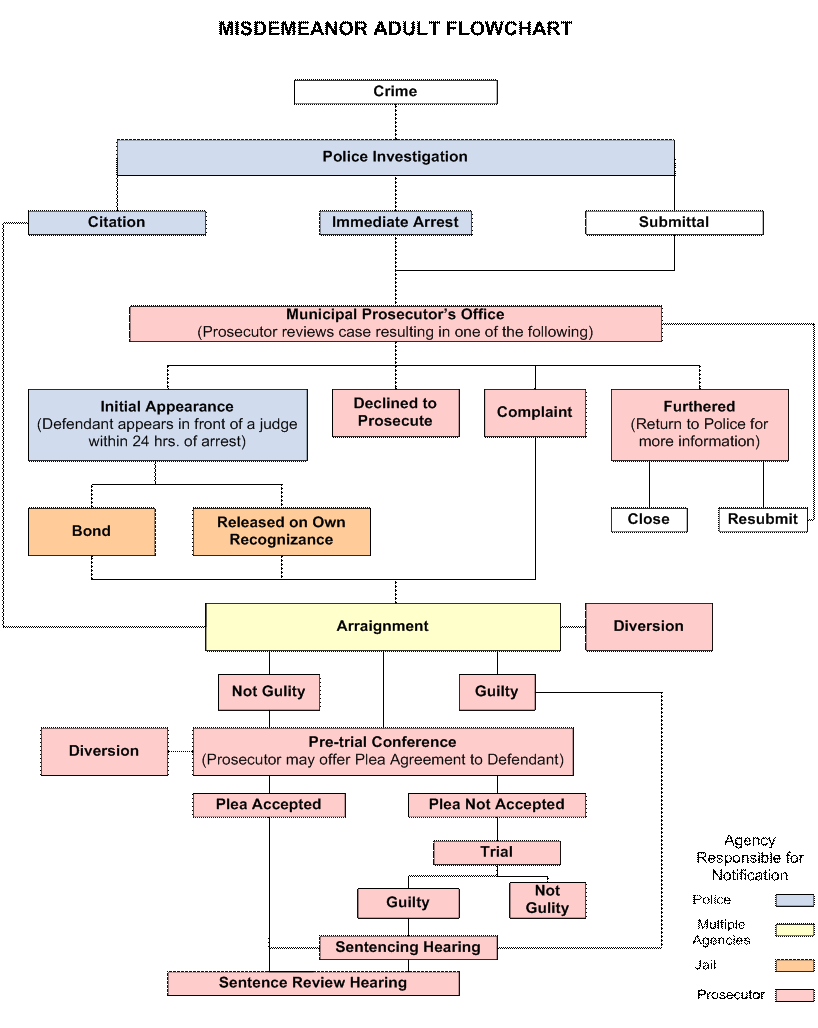 Definitions of Hearings and Proceedings

In most cases, a patrol officer who responds to the crime scene or the location of the victim conducts an initial investigation of a crime. There the patrol officer will assist with any individual’s needs, interview the victim(s) and any witnesses and begin an initial report listing the circumstances of the crime. In addition, the officer may take photographs, dust for fingerprints, and collect any evidence during an inspection of the scene. As of September 1, 1996, law enforcement officers are required to advise victims of their pre-conviction rights, give them written information regarding their rights, and offer them an opportunity to request subsequent notification throughout the process.

A sergeant or another ranking officer in the Detective Division then reviews the patrol officer’s report. He/she may assign the case to a detective for a more complete follow-up investigation.

When the investigating officer believes that a suspect has been identified and that there is sufficient evidence, the case is submitted to the prosecutor's office. The prosecuting agency can do one of three things

When a defendant is arrested at the scene of the crime or as a result of an arrest warrant, he or she is taken to jail. Within twenty-four (24) hours after the arrest, the defendant must be taken before a judge or commissioner for an Initial Appearance (IA).

The following are ways a defendant can be released:

After the arraignment and before a trial, there are many activities performed in preparation for trial. By Arizona Rules of Criminal Procedure, both the prosecutor and defense must disclose information to the other party. This process, called discovery, includes providing the defense attorney with a copy of the police report and any other written information which includes interviews with prospective witnesses. In some agencies this may include victim impact statements. An advocate should check with each agency they deal with so the victim is aware of this before submitting a statement. In Arizona, the defense has the right to interview all of the State’s witnesses prior to trial or a plea agreement. The victim, however, has the right to refuse to submit to a pre-trial interview, deposition or other discovery request by the defendant, the defendant’s attorney or other person acting on behalf of the defendant.

Before the trial, the prosecutor assigned to the case may discuss the possibility of a negotiated plea offer with the defense attorney, which would allow the defendant to:

Upon request, the prosecutor will confer with the victim(s) regarding the plea offer before it is entered into record with the court.

If an agreement is reached, the attorneys and the defendant appear before a Judge for a change of plea hearing (COP). The defendant enters a plea of guilty as agreed, and signs a form declaring that he/she is knowingly giving up various rights, including his/her right to a trial and the right to cross-examine witnesses. The victim has the right to be present and to make a statement expressing his/her opinion about the plea agreement. The Judge may consider the victim’s opinion when deciding whether or not to accept the plea agreement. Upon acceptance of the plea agreement, the Judge will enter a finding of guilt against the defendant.

If a plea agreement is not reached, the case may go to trial. All parties involved in the case including the prosecution witnesses and defense witnesses will be subpoenaed (summoned) in advance to testify before a Judge, or a Judge and jury. Witnesses are excluded from the courtroom until they are finished testifying. This is known as the exclusionary rule, and the argument for this rule is to ensure that a witness is not influenced by the testimony of another witness. However, the victim has the right to be present throughout the trial including jury selection.

If the defendant pleads guilty, or if the defendant is found guilty, the Judge will set a date for the defendant to be sentenced. In some situations, when either the prosecutor or the defense attorney has strong feelings about the recommended sentence, testimony especially relevant to the sentence may be heard at a special sentencing hearing. This type of hearing is called an Aggravation/Mitigation Hearing or Presentence Hearing. The victim is allowed to make a statement to the Judge at the time of this hearing and at the sentencing hearing.